The Small Claims Court in Ireland-What You Need to Know 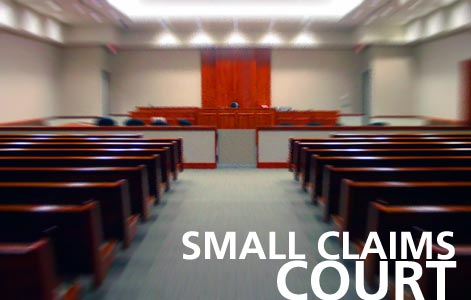 Have you a civil claim against a person or business for less than €2,000?

The Small Claims court procedure is a service provided by District Court offices in Ireland and is designed to handle consumer claims cheaply without involving a solicitor.

However you need to weigh up the pros and cons of carrying out the procedure yourself or engaging the services of a solicitor.

To be eligible to use the small claims procedure, you, the “consumer” must have bought the goods or services (or the service) for private use from someone selling them in the course of business.

The small claims procedure is now available for use by one business person against another since Jan. 2010.

You should bring your small claim in the District Court area where:

Type of small claims dealt with

(c) a claim for the non-return of a rent deposit for certain kinds of rented properties. For example, a holiday home or a room / flat in a premises where the owner also lives provided that a claim does not exceed €2,000.

Small claims in respect of other matters relating to rented accommodation must be brought to: Private Residential Tenancies Board.

Excluded from the small claims procedure are claims arising from:

(a) a hire-purchase agreement

(b) a breach of a leasing agreement

In making a small claim you must be sure of the name and address of the person or company against whom you want to make a claim. These details must be accurate in order to enable the Sheriff to execute the Court Order (Decree).

When a Respondent is a company, rather than an individual, it is important to ascertain the correct title of the company. This may be obtained from the Companies Registration Office www.cro.ie

How to Make a small claim

Contact the District Court Office in the area where:

The fee for making a small claim is €25.

The completed application form together with the fee of €25 should be lodged with the Small Claims Registrar.

A copy of the completed application form will be sent by the Registrar to the person/party against whom you are making a claim, called the Respondent.

The original application form will be kept in the Registrar’s office.

If your small claim is disputed

If the Small Claims Registrar receives a notice from the Respondent disputing your claim or making a counterclaim against you, the Registrar will contact you and let you have a copy of the Respondent’s answer.

The Registrar may interview and negotiate with both parties to try to reach an agreement.

If your small claim is not disputed

If the Respondent admits your small claim he/she is required to notify the Registrar’s office by returning a Notice of Acceptance of Liability form. If the Respondent does not reply, the claim will be automatically treated as undisputed.

The District Court will then make an order in your favour (without you having to attend court) for the amount claimed, and direct that it be paid within a short specific period of time.

A counterclaim is a claim made against you by the Respondent.

Failure to resolve a small claim

The Small Claims Registrar will probably ask you and the Respondent to outline the facts.

He/she may question both parties in an effort to clarify the issues.

If an agreement cannot be reached the Small Claims Registrar may there and then fix a date, time and location for a hearing of the claim before a judge of the District Court.

The date and time of the hearing and the address of the courthouse will be sent to both parties by post.

You must attend the District Court hearing.

On the court day remember to bring with you documentary evidence supporting your claim, e.g. letters, receipts, invoices.

The case will be heard in public as part of a normal sitting of the District Court.

Evidence must be given under oath or affirmation and the Respondent can question you on matters relating to your claim (called cross-examination).

The judge may require the Small Claims Registrar to assist the court at the hearing.

When your case is called the Court Registrar will call you to the witness box to give evidence.

The Respondent will also be given an opportunity to give evidence.

Each witness can be subject to cross examination by the opposing party or their legal representatives.

Engaging a solicitor for your small claim

You may engage a solicitor at your own cost and many people do so to ensure silly mistakes don’t compromise your claim.

You can bring a witness, but if expenses are incurred you will have to pay those yourself.

If you think it necessary, in your own interest, to have an expert’s report you will have to pay for this. Expert reports and witness expenses must be paid for by you.

Likewise, if the Respondent calls experts or witnesses he/she will be liable for their costs, if any.

The Small Claims Registrar will, if you request and pay the small requisite fee, prepare and issue a witness summons on your behalf requiring a witness to attend the hearing.

The Small Claims Registrar will arrange service of the summons.

You will be obliged to pay for any financial loss incurred by the witness in attending court, if claimed

If the matter is decided in your favour

If the small claim is resolved in your favour, the Respondent will be notified of the court’s decision a few days after the hearing and will be allowed approximately 4 weeks to pay the amount awarded by the court.

Appealing the decision of the District Court

Both the Applicant and the Respondent have the right to appeal an order of the District Court to the Circuit Court.

If the respondent does not pay

If the respondent does not pay, you can apply to the Small Claims Registrar to have the order of the court sent to you for execution by the sheriff.

There will be a fee payable to the sheriff, which will be refunded to you if the Sheriff succeeds in executing the court order (decree).

The execution of the court order is then a matter for the sheriff who will notify the claimant.

Information and assistance on enforcement procedures are available from the Small Claims Registrar.

For various reasons the Sheriff may not always be successful in the execution of Court Orders.

The small claims procedure can be a very useful procedure. But the small claim must be less than €2,000 and you can not use it to pursue business debts.

The small claims court in Ireland is an effective method for resolving small claims without the need to employ a solicitor and the small claims procedure is pretty straightforward whilst the district court staff who deal with it are very helpful in the main and will answer your queries.

Note: the small claims procedure was changed in 2010 to allow businesses to pursue claims in certain circumstances. Read a summary from the Court’s website here.