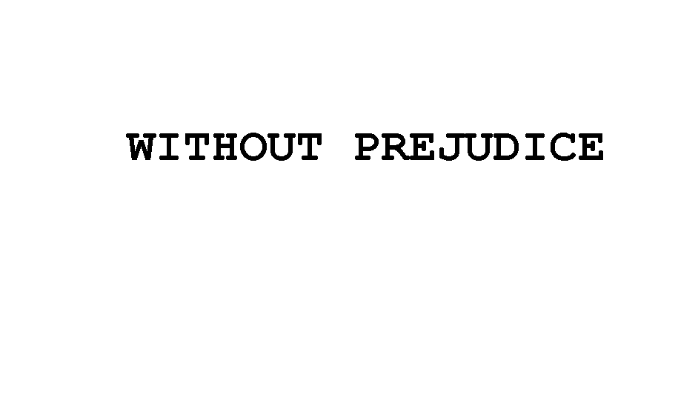 What does this mean, though?

Let’s take a look, shall we?

The Without Prejudice Rule

The Without Prejudice rule/principle is one which states that statements made orally or in writing and marked “without prejudice” with a view to settling a dispute will normally not be admissible in evidence against the party who makes the statement or writes the letter.

It is similar to an “off the record” conversation you may have heard of in various circles eg journalism.

The reason this principle is accepted and encouraged is that it is widely regarded as a good thing that parties to a dispute will attempt to settle their differences rather than going to Court on every occasion. Thus, there is a clear public policy justification for the rule.

Any concession offered in a without prejudice letter cannot be referred to later on if the matter is not settled and it goes ahead to Court. Therefore, if I owe you a disputed debt of €100,000 and you offer, in a without prejudice letter, to accept €70,000 in full and final settlement, and I do not accept this offer you can pursue me for the full €100,000 in Court and I cannot refer to your previous willingness to accept €70,000 as evidence that I do not owe you €100,000.

This liability of €100,000 must be disputed by me, though. If I accepted I owed the €100,000 but was merely looking for a discount then I cannot rely on the Without Prejudice label as there is no dispute about the debt or the amount owed.

Where a party makes a without prejudice the response to that offer, regardless of the content, is also privileged as the entire totality of that correspondence is privileged.

The Without Prejudice Label

Marking your correspondence “without prejudice”, however, does not mean it is truly without prejudice; your letter must have been part of an attempt to settle the dispute and there must have been legal proceedings in being or being contemplated by one of the parties. Using the label will not give any protection if the correspondence is not a genuine attempt to settle a dispute.

A without prejudice letter is the opposite of open correspondence.

An open letter may contain an offer, for tactical reasons in litigation, to settle a dispute. This letter will be relied upon in Court to influence the Judge when it comes to awarding costs at the end of the hearing and if such a letter is written it should be made clear that it is open.

There are two without prejudice labels in use:

The Without Prejudice save as to costs letter is a Calderbank letter (learn more about Calderbank letters here). This type of without prejudice correspondence can only be referred to when the question of costs is being considered by the Court at the end of the trial.

Exceptions to the Without Prejudice Rule

There are exceptions to the rule:

The rule applies to written and oral communication, and must be a genuine attempt to settle a dispute. It is the substance of the correspondence that counts, not the label, and this will be assessed objectively.

It is open to the parties where there is no dispute, for example in relation to property purchase/sales, that all correspondence will be without prejudice/subject to contract until there is a binding contract in place. This is the practice in conveyancing in Ireland.

Without prejudice correspondence attracts joint privilege which means that it can only be waived with the consent of both parties.